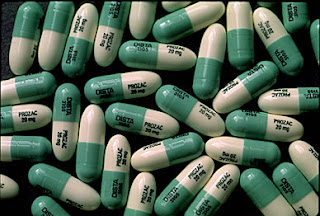 I remember when Prozac first came out, in the late 1980s.  It was marketed as a kind of miracle cure for depression, and was considered a preferable alternative to the then MAO-inhibitors and Tricyclics that were being prescribed at the time.  Prozac was marketed as having almost no side-effects, which was in stark contrast to the available drugs for treating mood disorders. Soon after doctors started prescribing Prozac,  we began to get complaints from patients about their ability to orgasm and sometimes their ability to experience sexual desire.  We were so enamored with this miracle drug that I think we often were unempathetic to our clients’ concerns because, wouldn’t everyone rather feel happy than be able to have an orgasm?  Since then, our notions about the importance of sexuality have evolved.  Also, the number of SSRIs on the market has increased and some atypical antidepressants (i.e., Wellbutrin) have been introduced that have been shown to be effective.  Clients who have sexual side-effects on one medication can be tried on a variety of medications until they find one that helps them but produces the least number of side-effects
.
I want to mention however, that while I sympathize with people who have sexual side effects, it is nearly always helpful for individuals to attempt to define sex in the broadest possible manner.  When one defines sex in the most heteronormative (i.e., penile-vaginal, penetrative, leading to orgasm) fashion, it can create unrealistic expectations.  Many of us will, at some point in our life, be on a medication that affects our sex drive, become disabled, and/or we will ALL age.  Our ability to be broad minded and adventurous regarding sex will help us have healthy sexual lives throughout the years to come, no matter the condition of our biology and body.

Here’s a helpful article about this topic from buzzfeed: Click here